What’s the Difference Between a Persian and Oriental Rug?

Many people use the terms “Persian carpet” and “Oriental carpet” interchangeably, but they are actually very different. Traditionally, the terms Persian and Oriental referred to the area where the rug was crafted.

In the past, any carpet made in Asia or the Middle East (including China, India, Egypt, Afghanistan, Pakistan, and Iran) was considered Oriental. Persian carpets are traditionally made in the Middle East, specifically Iran, which was formerly known as Persia. That means Persian rugs are a subset of Oriental rugs. All Persian rugs are Oriental, but not all Oriental rugs are Persian.

For a variety of reasons, Persian rugs became more popular among European consumers. Since Persian carpets are technically also Oriental, the two terms became confused and are often misused. Nowadays, “Persian” and “Oriental” refer to the style, technique, and design of the rug rather than the region where it was made. These carpets have become wildly popular all over the world.

To be considered truly Persian or Oriental, rugs must be handmade by skilled artisans. Today, many elements of the carpet are created by machines, like the dye and thread. However, they are still knotted by hand using the same techniques carpet weavers used for hundreds of years. 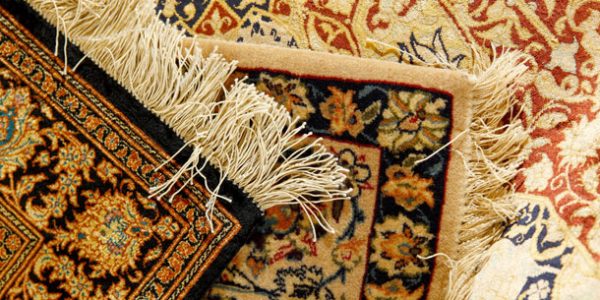 There are hundreds of traditional types of Persian rugs, each originating in a small village and developed over hundreds of years. The craft is passed down throughout generations, giving each region of the Middle East its own distinctive style. In fact, most carpet designs are named after the village, nomadic tribe, or city that specialized in a particular pattern or style of weaving. For example, many famous and popular areas for carpet weaving include Tabriz, Kashan, Herat, and Kerman. Each region has its own distinctive styles and patterns for carpet making.

Materials
Persian rugs are usually made with wool yarn. Nomadic tribes were common in Iran before the Industrial Revolution, and they often raised sheep as a source of food, trade, and wool. Artisans created the intricate patterns in their carpets by tying thousands of knots in the rug by hand. Fine examples have as many as 500 knots per square inch.Real Persian carpets will also be well oiled with lanolin, a wax naturally found on domestic sheep wool. The lanolin acts as a preservative, which is why antique Persian carpets survive for hundreds of years with little degradation.

Design
A traditional Persian carpet design can include any of four basic patterns: all-over, central medallion, compartment, and one-sided. Most styles feature symmetrical designs, or at least feature designs that appear symmetrical. An all-over pattern is exactly what it sounds like. A repeating geometric or floral pattern repeats across the entire field of the rug. A central medallion pattern features a circular, oval, or contrasting design in the center of the carpet. The central feature can be a geometric design, animal, contrasting blank space, even text. A compartment pattern is similar to the all-over pattern. It features a repeating pattern of discrete geometric of floral designs, much like a patchwork quilt. Each compartment can be square, diamond, or an interlocking design. A one-sided pattern is typically asymmetrical. That isn’t to say they have an unbalanced design, simply if you fold the rug in half, the design on one side doesn’t match the pattern on the other side. Persian rugs tend to use more warm-toned colours in their designs. Wool is dyed deep indigo, red, rust tones, ivory, sage and golden yellow.

When you’re not counting Persian rugs, the most distinctive style of Oriental rugs comes from China. Chinese culture and tradition are at the center of the carpet-weaving industry, just as they are in the Middle East. However, Chinese Oriental carpets never gained quite the level of popularity Persian rugs did. Chinese isolationism kept Oriental rug trading from becoming truly international. Instead, most rugs were produced, sold, and enjoyed in China for hundreds of years before they were discovered by the outside world. Only after the 19th century did Chinese rugs begin to be exported. However, the Chinese drastically changed their manufacturing process to produce rugs quickly and cheaply, using a more westernized art deco design in the early 20th century.

Design
While traditional Chinese carpet weavers used similar designs to their Persian contemporaries, the motifs and symbols reflected a Chinese heritage. Oriental carpets incorporate the same patterns as Persian rugs, usually with a twist. They often contain flora and fauna motifs, using a more curved line quality than is typically seen in Persian rugs. They also include landscape designs with mountains, lakes, fields, and trees. Many Oriental rugs are also sculpted with contrasting colours that add texture to the designs in the weave. Flowers, trees, and clouds may be raised from the field to create a three-dimensional effect. Oriental rugs often use a cooler colour scheme, such as rich blue, apricot, yellow, and delicate pink tones.

Information provided will not be distributed to any third party source.

Request an estimate for carpet or rug cleaning from Babayan’s. Simply fill out the form with your name, contact information, information about your rug, and requested dates for pick-up and delivery.

Please include your NAME, PHONE NUMBER and REFERENCE NUMBER in the comments section of your e-transfer for reference.